The Los Angeles River at Daybreak

Watching a spot of slow water moving I come to realize

I am watching the still reflection of a kite hawk, poised

and growing larger so dropping straight down to the  water.

We occupy our different spaces; we gaze in the same place;

it’s the prey she sees; I see her. She is wide of eye and certain

of purpose, expertly shaping the air and sky with white wings

until the surface is chaos, rippled circles and spinning distinctions.

Only the sky remains behind, the constant sky, where I see in it

only the water-without-the-hawk. These meetings unlikely:

The hawk and reflection, the slow city river and the blank sky,

on our separate seekings, leaving out the crucial invisibles

that allow us both to see some blindnesses are necessary.

The shift in the wind a pivot, and I opened my eyes:

the change so slightly, as much as they could. East

of here, the old hills line up waiting for houses

to come and go; on the shore, the sand remembers

the hills. In midst of all this memory, I make

a sound like “shhhh!” that the waves ignore. A gull

seems circumspect, looks at me askance, but calls

anyway. . .In the hush between the breaking waves,

under the smoothing hand of the offshore air, clarity;

I find what I’m seeking in the persistent absence

of peace, the insistence of sound of air shoving water,

the silence at the moment of arrival: the noise after. 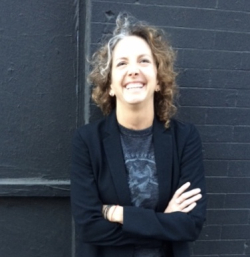 "The Last Line" is a collection of poems and photos by third-person speaker, Bobbie Jo Allen, who lives and writes and lives again in Los Angeles, California.
Subscribe to this blog's feed